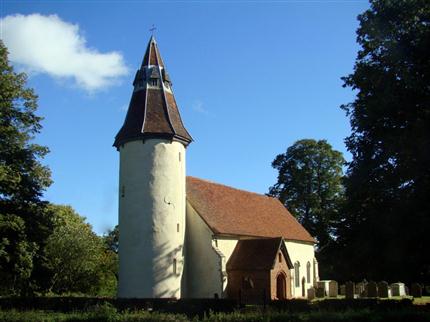 ANNUAL REPORT TO THE FRIENDS OF HOLY INNOCENTS CHURCH, LAMARSH FOR THE YEAR 2016
Registered Charity No 1088711

In my report last year I referred to the very urgent and necessary repairs to the tower plasterwork and elsewhere and the need to re-lime-wash all the exterior of the church. I appealed to some 25 charities and companies some of whom had contributed to the Bell Restoration appeal. I received £11,500 from charities. In addition I received two very generous donations from two people living in the village. I also received a number of smaller donations from a funeral collection and others. The work was scheduled to start at the end of August, however due to the dry warm weather this was not possible as lime mortar likes cooler weather! The final amount raised, during 2015 and 2016, was £19,349.50. I had always envisaged the Friends making a donation out of their reserves, which was required to pay the VAT on the works. The tower restoration and re-lime-washing the church cost £23,952 (which includes VAT and for which I submitted a VAT recovery of nearly £4,000) and in addition it was found that there were a number of damaged tiles alongside the eaves on the East end of the church. The builder, Chris Starns, arranged for these to be replaced and the work cost £348 including VAT, which I have also reclaimed.

Chris Starns had done some of the work connected to the bell restoration in 2006 and his workmanship was first class. I was not therefore surprised, when he told me that before re-paltering anywhere on the church, he had had the old adjoining plaster analysed and arranged for an identical mix to the original to be used. Needless to say there were different mixes in different areas of plaster. He also discovered, when re-lime-washing, that at the East end of the church one of the rainwater downpipes was not connected to the gutter, which was the most likely cause of the crack in the wall behind the altar. He repaired this and did other necessary work without charge. He admits to love doing up old buildings!

I formed the Friends in 2001 and since then I have raised in excess of £109,000. This takes the total I have raised for various churches since 1960, recalculated into to-days pound value, to just under £500,000. I therefore feel it is time to retire!

Following last year’s AGM Gay Foord was replaced as a Trustee by John McGilley.. David Anderson needs to be replaced as he wishes to retire as he, like me, no longer lives in Lamarsh. I will remain a Trustee for another year but if no one is found to take over from me I intend to wind-up the Friends. John McGilley and I will need to be re-elected at the AGM.

John McGilley has persuaded his Accountant, Nigel Sheldrake, to sign off these accounts for which I am very grateful.

Independent examiners report to the trustees of The Friends of Holy Innocents Church, Lamarsh
I report on the accounts of the Trust for the year ended 31st December 2016, which are as set out above
Respective responsibilities of trustees and examiner
The charity's trustees are responsible for the preparation of the accounts. The charity's trustees consider that an audit is not required for this year under section 144(2) of the Charities Act 2011 (the 2011 Act) and that an independent examination is needed.